On March 2018, NIAD-QE was awarded the 2018 APQN Quality Award as a co-recipient along with Higher Education Evaluation Center of the Ministry of Education (HEEC) of China and Korean Council for University Education (KCUE). The award is presented by Asia-Pacific Quality Network (APQN) to honor organizations and individuals who have made outstanding contributions to quality assurance and made exemplary efforts in the Asia-Pacific region.

The award was for one of three award categories, "International Cooperation in QA", which is presented to organizations that successfully achieve international cooperation with other organizations in the international initiatives of transnational education and quality assurance. The winner of the award was chosen based on recognition of the joint initiative by the quality assurance agencies of Japan-China-Korea to monitor the 5 year ’Campus Asia’ pilot programs, beginning in 2011, and a review by a panel of international experts. At the award ceremony held in Nagpur, India, attended together by Professor Takenaka from the research department of NIAD-QE and representatives of HEEC and KCUE, a commemorative plaque was awarded by the President of APQN. This was the second award to be received by NIAD-QE. The previous award was won in 2013.

‘CAMPUS Asia’ is a joint initiative led by the governments of Japan-China-Korea, with the aim of strengthening exchange and cooperation with quality assurance among universities in Japan, China and Korea. In 2013, 10 international cooperative academic programs were selected as pilot programs as a part of the initiative. In addition to monitoring these ‘Campus Asia’ programs to identify examples of good practices, publications such as Joint guidelines for international cooperative academic programs were written and presented at international meetings. (The initiative was lead by Kazuo Okamoto, Vice-President of NIAD-QE at the time.) Conducting quality assurance activities cooperatively among three quality assurance agencies from three countries was an advanced initiative at the time even by global standards. 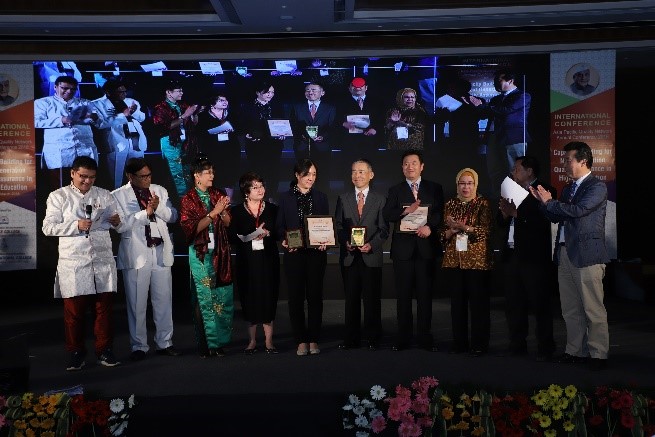 President Fukuda and others with the award