On February 23, 2021, the 3rd Memorandum of Understanding between NIAD-QE and KCUE-KUAI (Korean Council for University Education – Korean University Accreditation Institute) came into effect by signing the document. Mr. In-chul Kim, the Chairman of KCUE and Mr. Se-keun Ahn, the President of KCUE-KUAI signed the document on behalf of KCUE-KUAI and on for NIAD-QE, President Fukuda Hideki Ph.D. signed. The first MoU between NIAD and KCUE for reciprocal cooperation was signed in August 2010 and the second MoU was signed in December 2015.

KCUE is also Korea's National Information Centre (NIC), officially designated by the Korean Ministry of Education under the Asia-Pacific Regional Convention on the Recognition of Qualifications in Higher Education (Tokyo Convention). It has established the Korea Academic Recognition Information Center (KARIC) in May 2019 to implement the convention, providing information on Korea's higher education qualification system.

NIAD-QE and KCUE-KUAI have been cooperating with each other, mainly on the quality assurance of Japan-China-Korea relationships and by Monitoring activities on CAMPUS Asia. The two organizations have also established partnerships through various projects such as a daily exchange of information on the quality assurance system, the academic recognition in higher education, and cooperation in writing NIAD-QE’s publication in 'Overview of the Higher Education and Quality Assurance System – Korea 2nd edition'.

Based on the renewal of this memorandum, the two organizations continue to work by deepening information exchange and cooperating on their activities for quality assurance and academic recognition in higher education. 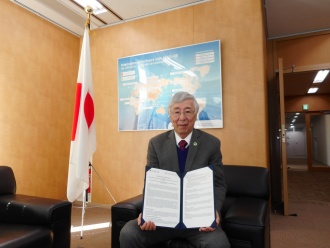