The National Information Center for Academic Recognition Japan will be established on September 1, 2019 in accordance with the UNESCO regional convention with the aim of ensuring credibility of Japanese higher education qualifications and to facilitate recognition of qualifications between Japan, the Asia-Pacific, and the world.

The Center will be established within NIAD-QE on September 1, 2019 as Japan’s official national information center (NIC). It will provide information on education to facilitate recognition of higher education qualifications, in accordance with the UNESCO Asia-Pacific Regional Convention on the Recognition of Qualifications in Higher Education (known as the Tokyo Convention). Japan acceded the Convention in December 2017, and it entered into force in February 2018.

The Center’s website will also be launched on the same day, to provide information in both English and Japanese about Japan’s education system, a list of higher education institutions in Japan, and overviews of education systems of other State Parties of the Tokyo Convention. In addition, the Center will conduct relevant survey and research, and collaborate with other NICs internationally.

To commemorate the establishment of the Center, an opening ceremony will be held on September 2, 2019, with a speech by Director Shigeru Aoyagi from UNESCO Bangkok. Please refer to the website below for details. 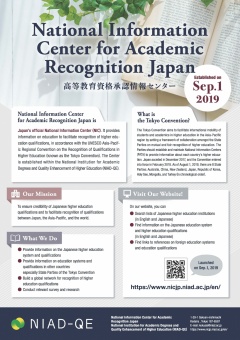